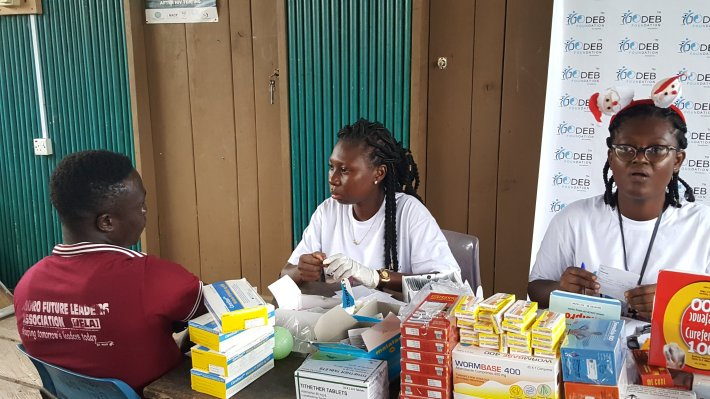 At the just ended Reaching The Unreached Project on 31st August, 2019 at Nzulezo, data gathered from a health screening exercise reveals that majority of children in the community have Malaria. As part of the exercise, approximately 120 residents were screened. Immediate attention was shifted to screening children because many children tested positive to Malaria. Out of a total number of 90 children screened for malaria, 86 of them tested positive. On a scale of 100 percent, 15 percent of adults (15 to 75 years) tested positive and 85 percent who are children (1 year to 14 years) also tested positive. This does not come as a surprise looking at how unpleasant the general sanitation is and how filt has engulfed the community situated on a river. A health assessment conducted by nurses of Jodeb Foundation made the following observations; 1. Instead of dustbins, some residents dumped their solid waste in the river. 2. The community has no health facility and health professionals. 3. No access to prompt and effective treatment of malaria due to the absence of a health facility. 4. No regular and effective Monitoring and Evaluation mechanism from the district health office. 5. No proper environmental management standards are adhered to. Residents urinate, brush teeth, bath and do all manner of things in the water. 6. Residents hardly sleep in treated nets. 7. Residents espercially children are exposed to unhygienic environments. 8. Poor House hold maintenance. 9. Lack of community sensitization on malaria and other related health issues. Based on the above observations, the team recommended the following; 1. Immediate allocation of a health facility in the community and the deployment of health professionals to the community. 2. Regular monitoring by district health officials. 3. Regular education on the need to sleep under insecticide-treated bednets in rooms with screened windows and doors. 4. The district health secretariat should allocate approved and safe methods of disposing waste. 5. A possible ban on the use of plastic by residents. Although over the years Ghana has made significant gains in the various intervention strategies against Malaria is still a high burden Public Health problem with high case incidence and deaths. At a press briefing held on 10th April 2019 in Accra, Ghana announced the roll out of the Malaria Vaccine Implementation Programme. Director General of the Ghana Health Service Dr Anthony Nsiah- Asare, during the press briefing emphasized that the Malaria Vaccine has emerged as an additional tools of intervention to accelerate Ghana’s efforts towards control and elimination of malaria. As an organization, we applaud this programme but will also suggest that this program is rolled out at the district level espercially is deprived communities. We have realized that as a country we always struggle at implementing central government policies and programs. This is due to the fact that district assemblies and local government actors are not well resourced to carry out their mandate. Community growth and development is a collective responsibility. We therefore use this platform to draw attention to the health related concerns faced by the people of Nzulezo, espercially children. A tourist destination such as Nzulezo should be given the relevant attention. The 2018 Global Malaria report indicates that after an unprecedented period of success in global malaria control, progress has stalled. Data from 2015–2017 highlight that no significant progress in reducing global malaria cases was made in this period. There were an estimated 219 million cases and 435 000 related deaths in 2017.